TCS Lidingöloppet sends our most heartfelt birthday wishes to our founder Sven Gärderud, who turns 100 years old on the 29th of September! In an interview, Sven describes his unconditional love for sport, the role that Lidingöloppet has played in his life, and how the sports community is as important today as it was 57 years ago. 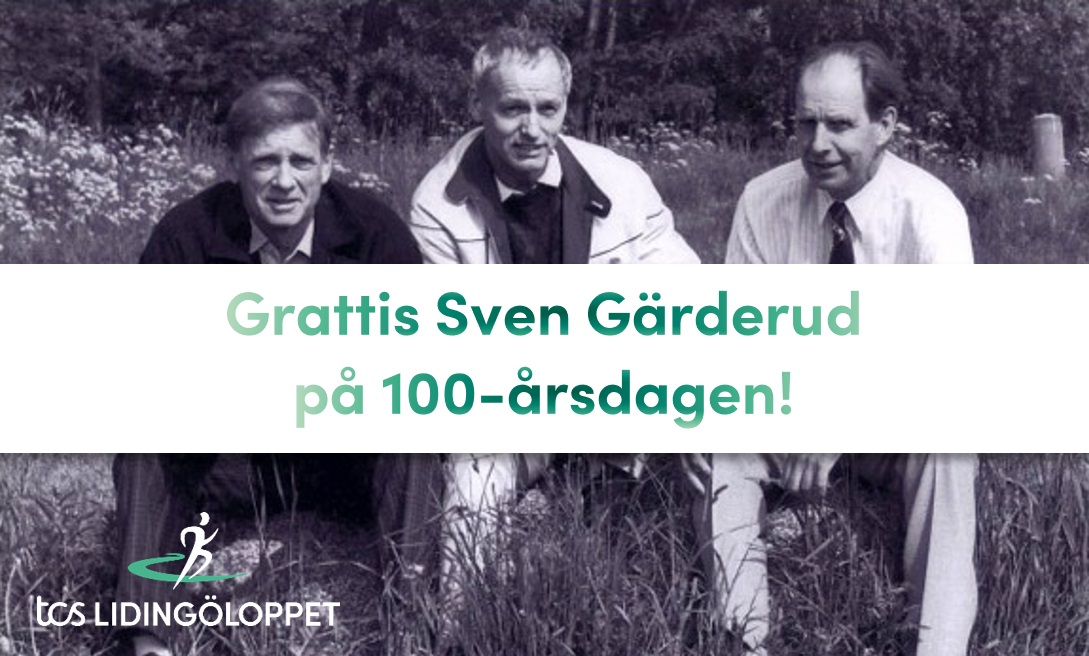 Your birthday has on several occasions coincided with Lidingöloppet. Which race traditions are usually included in your birthday celebrations?
For a long time, I celebrated my birthday by walking down to the finish area at Grönsta, right before the start of the 30K event. Where only 700 meters of the race remains there is a bench which bears my name, and from it I get first-row seating to the final kicks in all races.

Can your life so far be likened to a cross country race with good predictability for the road ahead, or has life been more like orienteering, with many surprises along the way?
It has been a bit of both - I have always worked with a long-term perspective, but life has still surprised positively with events I could never have foreseen. For example, I could never have dreamed that Lidingöloppet would have become as big as it got. It is fantastic to follow thousands of runners on Lidingö's trails every year - it has been unpredictable but so much fun to see the event grow over 57 years.

Which three milestones in life do you look back on with the most pride so far?
Although I understand the fun of "three milestones" when you are the founder of Lidingöloppet, it is difficult to choose only three highlights in life. The world of sports has brought me so much joy. The following are some of my own sport achievements which I look back on with great pride:

1. As a 19-year-old, I came in third at the Swedish Championships in the 3000 meter hurdles with a time of 9:21:2, which turned out to be a new Swedish junior record (Gunder Hägg had the previous one at 9:23).
2. As a 19-year-old I won the 3000 meters at Sundbybergs IP (8:41:0).
3. I won DN's Stadslopp in 1942. In 1943 I had the best of the recorded times in Slussträckan and the team won in a new record time.
4. I have been orienteering between 1938 and 2014 (and competed for three clubs MP, IFK Lidingö and Skogsluffarnas OK) and was among other things the runner-up at the Swedish Championships in 1942. I have up until now run almost 2500 orienteering races in 75 years.
5. Arrived in 1940 in 2: 2 place on the first leg in the ski messenger.
6. Was the runner-up in budkavlen in orienteering in 1943.
7. Arranged the Youth Cup on Lidingö for individuals aged 12-18 years with 1 event per month (for example athletics, skiing, orienteering, table tennis and badminton). About 300 participants  took part.
8. Has been an athletics coach for 10 years and has received the Swedish Athletics Foundation's Gold Medal.

Since I have logged my own runs and hikes over the years, I know that I have at this point completed two laps around the equator (80 000K)!

What are the secrets to living a long life? How big a role do you think sport has played?
It has played a big role - sports, as well as hiking in the woods and fields, are the best ways to stay healthy! And I hope that our political representatives in the municipality take careful note of this! Over the year, I have seen many examples of how the health of young people and the elderly has been disadvantaged due to poor political decisions.

According to legend, the idea of Lidingöloppet came after you read an article that called for a running competition for "the ordinary runner". In your experience, is the "regular runner" motivated by the same things today as it was 57 years ago? Does the Lidingö race fulfill a timeless purpose for all generations?
The description is correct - the idea for Lidingöloppet came in 1965 after I read an article in Idrottsbladet, written by the legendary sports journalist Sven Lindhagen, which called for a distance race similar to Vasaloppet and Tiomila. My wife Ingrid, who was herself involved in IFK Lidingö in 1930-1940, was positive about the initiative, and so was our neighbor Karl-Axel "Kacke" Karlberg, who then co-founded the race. I was the competition reader and secretary for the first 10 years and then Lars-Eric Dahlstedt from Lidingö took over both roles.

It seems like Lidingöloppet since then has become a timeless event which attracts participants in the same way today as it did at the start. One of the reasons may be that the event is an annual gathering place for families, colleagues and friends. The need to get-together and enjoy sport and nature together is the same in all times.

What do you hope will happen in Swedish recreational sports within the next 100 years?
As far as running is concerned, the situation looks good!

On behalf of our running community, Lidingöloppet thanks Sven Gärderud for all his efforts in promoting public health and sports available for everyone over 57 years!